The growing awareness in society of the need to conserve our planet is driving important changes in habits, aiming to make more responsible and sustainable use of available resources. The high water and energy consumption involved in the actions that we perform on a daily basis contributes to our environmental impact in a significant manner, using unsustainable amounts of natural resources and leading to the emission of atmospheric pollutants (CO2).

Laundry processes consume large amounts of water and energy, so the development of new laundry systems that are designed to work at low temperatures will have a major effect, reducing their environmental impact.

“If everyone in Europe reduced the average temperature at which they do their laundry by just 3°C, it would save the equivalent of the annual electricity consumption of a population of more than 300,000 inhabitants.” (1)

Laundry is a cleaning process that aims to effectively remove dirt that is adhered to fabrics. 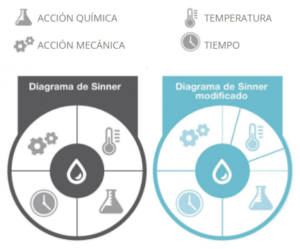 In a washing process, dirt removal is achieved by combining and optimizing the following four factors, which have a direct influence on the cleaning process: Chemical Action, Mechanical Action, Temperature and Time. These four variables are outlined in Sinner’s circle.

According to Sinner’s circle, for a given cleaning process, when one of the four variables is modified, the others must compensate for this in order to maintain equivalent cleaning results.

Temperature is, therefore, one of the fundamental parameters of the washing process, as it not only influences the detergent, but also has many other associated effects:

In laundry processes, the most advisable way to compensate for a decrease in Temperature is to modify the Chemical Action variable, using detergents that are specially designed to work at low temperatures. On the other hand, it is not recommended that the Mechanical Action (drum rotation, scrubbing before machine washing, etc.) be intensified, as excessive mechanical action can alter the characteristics of the fabrics, deteriorating their appearance (loss of colour, generation of frizz) and shortening their useful life. It is also not recommended that the Time be increased, so as not to reduce the efficiency of the process.

The need to reduce the energy consumption associated with laundry processes has led to the development of new washing systems that are capable of removing dirt at low temperatures, with short washing cycles, using as little water as possible, while still offering maximum fabric protection.

These washing systems are based on enzymatic detergent products, combined with bleaching agents that are specifically designed to work at low temperatures.

Enzymatic detergents incorporate enzymes that act as catalysts in the removal of dirt that is of biological origin, such as blood, milk, eggs, sauces, among other things. They facilitate the breaking down of these dirt molecules into smaller, more soluble fragments, making them easier to remove in the washing bath.

The enzymes that are most commonly used in laundry detergents are:

In addition, Cellulases are also used, as they act on cotton fibres in order to improve the degree of whiteness of the fabrics and eliminate “peeling”.

Therefore, in addition to the specific and selective effect that enzymes have on the type of dirt for which they are designed, they also allow a synergistic effect to be obtained at the level of primary and secondary detergent, improving the removal of other types of stains that have very different origins.

Bleaching agents are oxidizing chemical compounds that act effectively to remove stains that are sensitive to oxidation, such as wine, tea and coffee, and that also act to improve the whiteness of fabrics (especially for cotton textiles). In addition, their great oxidising capacity allows them to have an antibacterial effect, reducing the load of micro-organisms and guaranteeing maximum hygiene for the fabrics.

Historically, Chlorine (sodium hypochlorite-leach) was one of the most widely used chemical bleaches, and it is still very useful, due to its low cost and high degree of bleaching power at low temperatures. However, chlorine has major disadvantages; it can only be used for white clothes and, due to its high oxidising power, it is particularly aggressive on fabrics, reducing their useful life. As an alternative to chlorine, for coloured clothes, oxidation with hydrogen peroxide (hydrogen peroxide) has been widely used, but it is only effective at temperatures above 70ºC, and therefore has a high associated energy cost.

In response to the growing trend of low-temperature washing, new bleaching agents, which are active at low temperatures (around 40º-50ºC), have been developed in recent years, such as: Peracetic Acid, Sodium Percarbonate (activated with TAED) or Organic Peracetic Acids (such as phthaloimidoperoxyhexanoic acid -PAP-). All of these agents provide excellent results in bleaching and stain removal at low temperatures, guaranteeing maximum protection for the fabric and providing an extra antibacterial effect to the washing process.

The need to reduce the energy consumption associated with laundry processes has led to the development of new washing systems that are capable of removing dirt at low temperatures, with short washing cycles, using as little water as possible, while still offering maximum fabric protection

In order to maintain the detergency level of the process, detergents that are specifically formulated to work at low temperatures have been developed in order to compensate for the reduction in temperature. These detergents are based on the combination of enzymatic technology and new oxygenated bleaching agents, which work in a washing cycle synergistically in order to reach the maximum detergency level and restore the original degree of cleanliness and hygiene to the fabrics.

Do you want more information?
We help you

In accordance with Regulation 2016/679 (GDPR) the basic information on personal data protection is provided below:
- Data controller: PROQUIMIA, S.A.
- Purpose of processing: Managing the sending of information, resolving queries and/or collecting data for possible business relationships.
- Legal Basis: Consent of the person concerned
- Recipients: No data will be transferred to third parties, unless this is legally obliged.
- Rights: Access, rectification, deletion, opposition, limitation, portability and presentation of claims.
- Additional information: Additional and detailed information on Data Protection can be found on our website: Privacy policy